THE HEAD and more specifically the brain is among the most vital organs of the human body. However, these are not adapted to the dynamical loading conditions involved in modern accidents such as road and sport accidents. The consequences of these extreme loadings are often moderate to severe injuries. Preventing these head injuries is therefore a high priority.

From a mechanical point of view, the biological evolution of the head has lead to a number of integrated protection devices. The scalp and the skull but also to a certain extent the pressurized sub arachnoidal space and the dura matter are natural protections for the brain.

Figure shows a cross section of the model and illustrates the main anatomical features that are represented in the model which include the skull, falx, tentorium, subarachnoid space, scalp, cerebrum, cerebellum, and the brainstem.

The geometry of the inner and outer surfaces of the skull were digitized from a human adult male skull. Data given in an anatomical atlas was used to structure the remaining details of the head model and the whole model was meshed using Hypermesh software package. 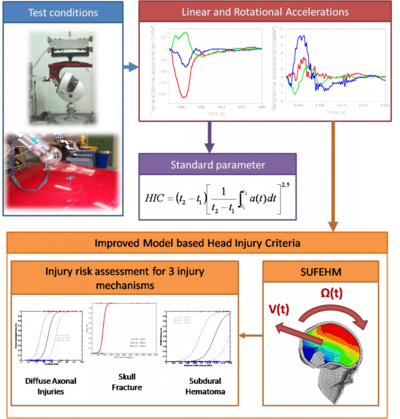 In an attempt to develop improved head injury criteria some real world head trauma that occurred in motor sport, motorcyclist, American football and pedestrian accidents were reconstructed with a state of the art head model (SUFEHM). Statistical analysis was carried out on global head response parameters, such as peak linear and rotational acceleration of the head and HIC, and the intra cerebral parameters computed with the head FE model, such as the von Mises Stress or strain and pressure in the brain, in order to determine which of the investigated metrics provided the most accurate predictor of the head injuries sustained in the accidents.

There is evidence to support the use of alternative parameters to predict head injury risk over HIC and peak linear head acceleration.

The use of the proposed head injury prediction tool shows a coupled experimental versus numerical approach. It is a matter of recording the linear and rotational 3D acceleration of the headform under impact and to consider these experimental data as the input for the driving of the head FE model, which in turn will derive the injury risk for DAI, SDH and skull fracture.

According to epidemiological studies reported in several countries, traumatic brain injury (TBI) is a major cause of death and disability among young pediatric population, and most frequent causes of TBI are vehicle traffic accidents, falls and mishandling (Viano et al., 1997). Determination of reliable injury criteria and tolerance limits is essential for the understanding of injury occurrence mechanisms and for development of protective devices. Investigations of these injuries go through the comprehension of dynamic behaviour of brain tissues. One way to investigate head trauma is numerical methods. Indeed, comparing the gravity and type of lesions of the trauma with results of accident simulations can lead to correlate mechanical parameters with a specific injury.

Accident studies in the literature often highlight the gravity and type of lesions of the head/neck system at specific ages, and vary if the accident involves a child or an adult. Indeed, the response of a complex system like head is closely linked to the size, the geometry and the constitutive law of the brain and skull.

In order to go further in the comprehension of head injuries, lot of works have dealt with experimental tests involving dummies or animals leading to the definition of injury criterion like the HIC, which is the most common used one. However, even if this criteria can evaluate the gravity of a lesion, it cannot make a clear distinction between different injury mechanisms during an impact because it is based on the only linear acceleration, and mechanical parameters are not taken into account. Progress in computer science allows developing new methods and new ways in head/neck system studies in order to perform precise finite element simulations.

In parallel of adult head studies, interests of biomechanics for child head injuries become more and more important. Indeed, accidental free falls or mishandling like “the shaken baby syndrome”, are very specific accident cases , very different from adult one, involving lots of children and which need to be clearly understood. So, it seems very important to study very specific child injury mechanisms.

Despites of recent developments in car passenger protection systems, cervical spine trauma still remain a significant problem. The costs to the society of whiplash-associated disorder (WAD) in the early nineties have been estimated to be 5-10 Billion Euros per Year in Europe.

In many cases, cervical spine trauma is caused by low-speed rear-end impact. More often than not these lesions are benign, but can still generate significant expense.

Before to specify mechanical laws for finite element modeling, rheological properties of brain tissue are needed. The results obtained in this way come from two kinds of protocols:

- However recent in vivo studies for brain tissue have been published that use Magnetic Resonance Elastography (MRE). This non invasive technique is based on the coupling of an intra-cerebral shear wave propagating device and a MRI system. 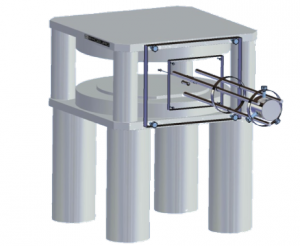 Ex vivo and in vivo characterization of soft tissues including their dynamic behaviour, microscopic components, heterogeneity and anisotropy investigation is an essential topic to develop analytical models and at least more realistic models of the human brain.

The objective of this study is to develop a FE liver model which can be used for biomechanics and impact biomechanical applications. Mechanical properties of the soft tissue are considered most important to develop such models, so in vivo and in vitro mechanical characterization are performed on porcine liver as well as individual parts of the liver, namely Glisson’s capsule, veins and parenchyma. FE model is developed from the geometries obtained from the IRCAD Strasbourg, France, imparted with the mechanical properties. The model is also validated with an in vivo dynamic impactor test experiment. 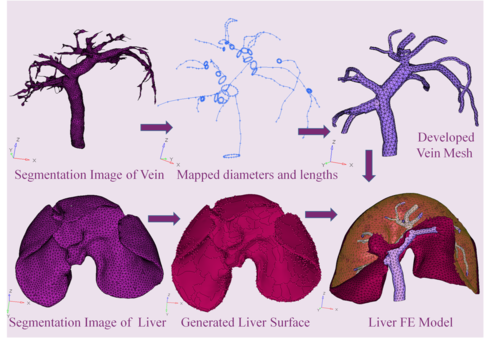 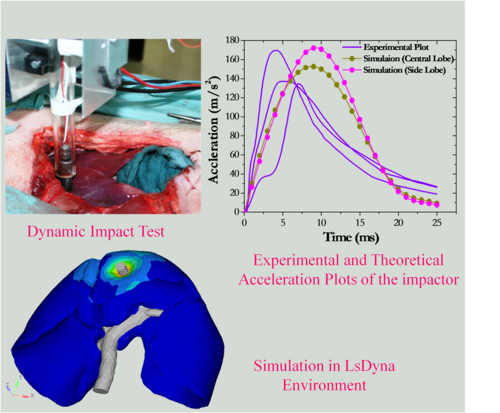 The developed detailed liver FE model is validated with the in vivo dynamic impact test experiment and can be used for biomechanics and impact biomechanical applications. PASSPORT